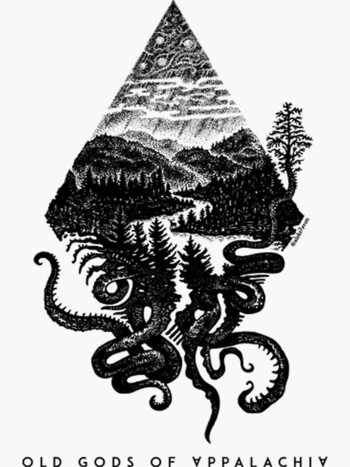 Come for the tentacles; stay for the banjos.
I walk these hills, leave these dark valleys,
For I can't stay in the land unknown...
Advertisement:

is a horror anthology podcast telling stories from an alternate Appalachia never meant to be inhabited by humankind.

The show bills its setting as "an upside-down Appalachia": the stories it tells are based on real events in Appalachian history, and the locations where they take place based on real places in the region, but the names and details are changed, and events in the stories don't fit on a real-world timeline. The main difference of this world from our own is that the people who settled in the region were called there by Things imprisoned under the land, who reached out to miners and industrialists in hopes that they would be set free... and set free they were, and now Appalachia is filled with all manner of supernatural happenings straight out of folklore.

The show can be found on iTunes, Spotify, Google Play, Soundcloud, and Stitcher. Part of the Rusty Quill Network as of 2021.

There is a curse upon my every waking breath...