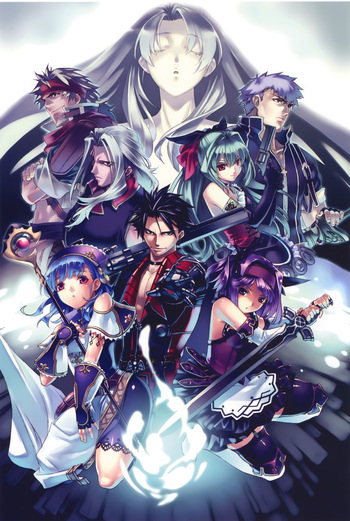 Blazing Souls is a Strategy RPG developed and published by Idea Factory in Japan and brought to the West by Aksys Games. It's a game from the PlayStation 2 and Xbox 360 that was never localized until its second update for the PSP. It's the third game of the Spectral Souls subseries, and it's related to a good deal of games of the same franchise, with referrences harkening all the way back to the first Spectral Force.

Nearly twenty years after the Seven-Years War (And following its True Ending), the world starts to recover from the massive chain of wars and both man and demonkind in Neverland seem to be finally reaching peace. However, a shady team of Artificial Humans known as Human Genomes have very different plans: They desire to supplant and replace humans and demons alike as the dominant species.

The story begins with Zelos, the protagonist, who makes his living as an independent contractor. After being assigned to a weird job and getting stuck with a team of his own and an amnesiac girl, he takes on different jobs and eventually comes in contact with the Elemental Cores, stones that give him immense power when implanted onto his prosthetic arms. On his travels, he also begins to encounter the Human Genomes, and is led to face events that are linked to both their creators and, unknowingly, his own past.