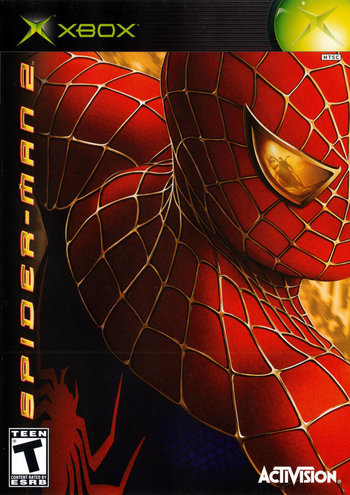 Coinciding with the release of the 2004 movie, the video game adaptation of Spider-Man 2 was developed by Treyarch Studios and published by Activision. Generally speaking, the game is a Wide Open Sandbox and its storyline basically follows the movie's plot, but had several notable diversions along the way, even featuring an entirely original subplot where Spidey butted heads with the illusion-based supervillain, Mysterio. Also, it featured Bruce Campbell as a Lemony Narrator.

and was considered a vast improvement on the So Okay, It's Average first game.

Also of note is the fact that the PC and PlayStation Portable versions were Reformulated Games, featuring different gameplay and much different stories than their console counterparts, with the PSP version basically being a port of the first movie game, down to even featuring some of the same bosses. They're not as fondly remembered as them either.

If you're looking for the similarly named sequel to Neversoft's Spider-Man, see Spider-Man 2 – Enter: Electro.

Tropes seen in Spider-Man 2 include: