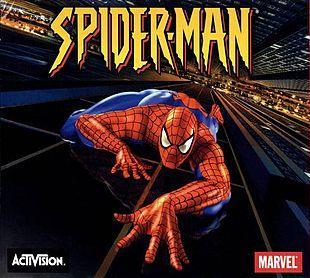 of the Spider-Man Theme Song
Advertisement:

Spider-Man is a fifth-generation video game starring the ol' webhead, which came out in 2000 and uses the same game engine as Tony Hawk's Pro Skater. The game was developed by Neversoft for the PlayStation and Nintendo 64 and ported to the Dreamcast, Microsoft Windows, and Apple Macintosh. A version of the game for Game Boy Color was developed by Vicarious Visions.

The game begins with the allegedly-reformed Dr. Otto Octavius showing off a brand-new project of his at a science expo, when all of a sudden, a familiar hero clad in red-and-blue tights bursts in and steals his invention... except that Peter Parker is in the audience, watching the heist unfold. Spider-Man then finds not just the police on his tail, but every villain in the city is on a simultaneous crime spree, including Venom, after the imposter-Spidey destroyed Eddie Brock's camera and ruined his chances of getting a good shot of Spider-Man red-handed. In addition, all of New York is blanketed by a mysterious fog, and it's up to Spider-Man to sort it all out.

A sequel, titled Enter: Electro, was released soon after, by Vicarious Visions.

Of course, this is just one of several video games about Spider-Man. For the game that was released as a tie-in to the Sam Raimi film, go to Spider-Man: The Movie. For the Insomniac Games-produced PlayStation 4 title of the same name, see Spider-Man (PS4). For the others, see the list here.

What do you get when you mix an unconscious Doctor Octopus with the Carnage symbiote?<br>You get Monster-Ock, a being that is fuelled by uncontrollable rage and the desire to tear Spider-Man to shreds.

What do you get when you mix an unconscious Doctor Octopus with the Carnage symbiote?<br>You get Monster-Ock, a being that is fuelled by uncontrollable rage and the desire to tear Spider-Man to shreds.