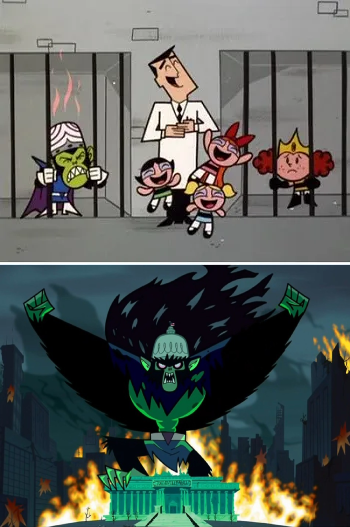 From a funny chimp to a frightening champ.
"Perhaps you'll laugh, but I know him better than most, and this is the truth; Littlefinger is one of the most dangerous men in Westeros."
— Varys, Game of Thrones
Advertisement:

Okay, so you have a villain, and, for whatever reason, either because they're harmless, ineffectual or both, you do not take them seriously. You might not even think about them at all. They might have a lame gimmick or a weird name or maybe they just do not stand out among the Mooks. They are not exactly on your radar. Even if you do remember them, you think they are either a nobody or a total joke.

Then they go on to subvert your expectations. Some put themselves through Training from Hell. Others turn out to be the villainous kind of the Crouching Moron, Hidden Badass. And the rest may be Obfuscating Stupidity. Either way, the villain ends up as someone who is not only able to show the heroes exactly why they are called their enemy, but often even become the Big Bad or The Man Behind the Man. This is when a villain decides to become their own Sorting Algorithm of Evil, or at least be recognized as more dangerous.

Should they fail to do the former, they will become a Big Bad Wannabe. Often the result of a Darker and Edgier reinvention of a franchise.

The villain may become a Knight of Cerebus.

Compare Dead Serious, From Nobody to Nightmare, Beware the Silly Ones. Breakout Villains are prone to becoming Not So Harmless. Contrast Villain Decay and Boisterous Weakling. When applied to minor heroes instead of minor villains, it's Let's Get Dangerous!. See also Team Rocket Wins. If it is later revealed that the villain always was that vile and/or dangerous, but the heroes or audience were misled into dismissing or liking them, see Bait the Dog.

Not to be confused with The Not-So-Harmless Punishment.

Possible spoilers ahead — read at your own risk.

It takes about three verses to realize that he's serious.
... Lord Beelzebub
Has never seen a soldier quite like me
Not only does his job, but does it happily.
...
I'm a dagger in your back
An extra turn upon the rack
I'm the quivering of your heart
A stabbing pain, a sudden start.

Alternative Title(s): Not So Harmless