Nothing Nice About Sugar and Spice 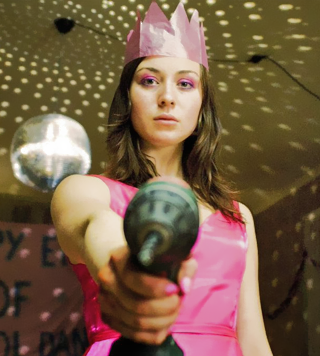 You don't want to be her date to the prom.
Advertisement:

A woman or girl is More Deadly Than the Male. Well, gone are the days where these women are restricted by Men Are Strong, Women Are Pretty and Real Women Don't Wear Dresses. This woman wears dresses (the girlier, the better), loves pink, flowers, and shoes, keeps cuddly things around, is image-conscious, Thinks Like a Romance Novel... and is out for blood.

Unlike her sisters the Girly Bruiser or the Lady of War, this woman is an invariably dark character, usually a Psychopathic Womanchild. She lacks scruples. For this reason, the trope mostly applies to female villains, although the odd very dark Anti-Hero or Anti-Villain may be found somewhere. If she's a supervillain, she might have Super Cute Superpowers such as a Heart Beatdown. She may be genuinely Affably Evil or a heroic character who is driven to commit cruelty. Whatever their stated goal, they will get down and dirty in fighting; they can be a Dark Action Girl, but they don't need to be. They'll kill. A simple Alpha Bitch doesn't qualify here, but a particularly clever, violent, or manipulative one might. They use their girlishness and/or traditional femininity to disarm those around them, but their femininity isn't a façade. It will often increase, rather than disappear, when they are committing murderous or evil acts. Their favorite tactics will be Wounded Gazelle Gambit and Obfuscating Stupidity. Some examples are Silk Hiding Steel, but in general, most of the examples here are more like pink angora rather than silk. Also, they usually don't hide their cores of steel very well - at least, not to the audience. Whatever girlish hallmarks they have will soon appear very sinister.

A Sister Trope to Sugary Malice, although this extends to costume, appearances, and props and is specifically feminine. Also, these characters are defined as being dangerous - not merely malicious. This woman uses Womanliness as Pathos.

Soundtrack Dissonance follows them around, as they'll usually be big fans of pop (especially boy bands), Retail Therapy, and other traditionally feminine media such as the Chick Flick. But they will also be ready to fight, stalk, and plot revenge. If there's a particular sinister scene of them smearing makeup over their face, it can almost be guaranteed that they qualify. When they're not wearing pink, they might be seen in an Ethereal White Dress, but whatever they wear, they follow Light Is Not Good and Bright Is Not Good.

They also have equally uncomfortable relationships to being Ms. Fanservice and Cute But Psycho. There will always be an effort to look cute, but how successful it is depends on individual portrayals. If they are a yandere - one of the more common types, although not all of them are - they will often use Distracted by the Sexy intentionally. However, it's just common for these women to try and perfect a highly sexualized image to such a degree that it's actually portrayed as downright scary and Fan Disservice. Some portrayals will exploit this to suggest that Makeup Is Evil or Vanity Is Feminine.

Decoy Damsel and Uncanny Valley Girl are usually Sub Tropes. See also Face of an Angel, Mind of a Demon.

This trope is Always Female and sometimes a Foil in a Tender Tomboyishness, Foul Femininity dynamic. The Distaff Counterpart to Sissy Villain, where male villains dress or behave effeminately.