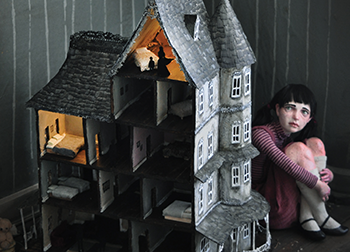 Miniatures are creepy. A common variation on this is the Reality Changing Miniature. However, dollhouses, often used for child's play, have come to be regarded as creepy in and of themselves. It's one of the easiest ways to create an Uncanny Village in a single room, and is often cost-effective. Unlike the Reality Changing Miniature, they do not need to have - and, most often, don't have - supernatural powers. They're just viewed as creepy by themselves. A common variation is when a dollhouse is eerily arranged to mirror some terrifying or disturbing event that has occurred in real life.

It can frequently reflect Alien Geometries, and more vicious versions can be an Eldritch Location. Regardless of villainy, they are often Bigger on the Inside (or made to appear this way).

The most popular version of this is twinned with the Creepy Doll, simply because dolls and dollhouses tend to go together, and tend to be possessions of the Creepy Child or the Deliberately Cute Child. For this trope, it's important that the dollhouse itself also be scary or used for scary purposes, and not just be creepy because it's occupied by one of them.

As time passes, creepy dollhouses tend to be used by a wider spectrum of people and for different reasons other than just horror. It's easier to use a dollhouse, for instance, to mimic a Haunted House, an Old, Dark House, or a dark secret. It also need not have a horrific purpose, as dollhouses can often be used to represent the Cloud Cuckoolander or as a favorite pastime for a Broken Bird. The main point is, they're unnerving in some way. May be accompanied by an Ominous Music Box Tune.

Not to Be Confused with the series Dollhouse.