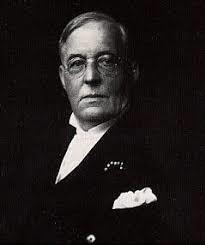 Montague Rhodes James (1 August 1862 – 12 June 1936) was a British academic from the late 19th and early 20th centuries. Known for his Ghost Stories, almost all of which involve, or are narrated by, a reclusive academic with antiquarian interests who works at one of the colleges of Cambridge. Notable stories include "Oh, Whistle and I'll Come to You, My Lad," "Casting the Runes," and "A Warning to the Curious". Known mostly in Britain, where his stories are frequently adapted for television or radio by The BBC. His works were frequently adapted as one of the Ghost Stories For Christmas.
Advertisement:

Works by this author give examples of: