Hand in the Hole 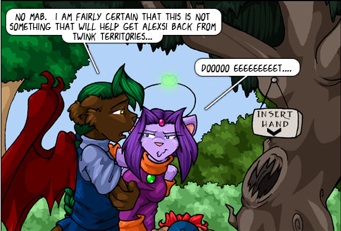 So. There's a hole in a wall or floor filled with an impenetrable, inky blackness and the vague promise of a great reward to those who stick their hand in. Should the character go for it?

Was that a question? Of course! Treasure! Well, that or a giant catfish ready to bite off the whole arm and/or deliver an incredibly lethal and painful poison.

This conundrum has plagued protagonist and player alike for eons. At best, Curiosity Is a Crapshoot which will yield a Plot Coupon, and at worst it will kill the cast because it's a Death Trap. Even when there's nothing dangerous there (or there is, but the character pulls their hand out just in time) expect another threat to use Offscreen Teleportation while they were distracted. You can also bet most villains and Temple of Doom architects will count on the protagonist/player's greed to make them go for it.

And of course, you can expect the Jerkass high on the Sorting Algorithm of Mortality to pretend to have his arm bit off to scare his companions... only to have it really bitten off or something even worse befall him.

The "modern" version involves a garbage disposal that's "on the fritz" and the owner sticking their hand in to remove the jam. In that case, the tension comes from "will the bad guy (usually some supernatural evil) turn it on and cut up the hand?" Or it could be that the audience starts fearing the same risk on grounds of mere incompetence or bad luck, especially if the character seems like the type who it would happen to.

Can be a type of Schmuck Bait. A more sexual-nightmare-type example incarnates as Vagina Dentata. Compare Clutching Hand Trap and Help, I'm Stuck!.