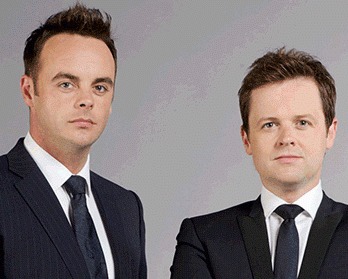 Ant is the one on the left.
"A lot of people have been wondering 'How can you tell the two of them apart?' Well, it's simple really. See... Ant is the one I want to Dec."
— Charlie Brooker
Advertisement:

Anthony McPartlin, OBE (born 18 November 1975) and Declan Donnelly, OBE (born 25 September 1975), better known as Ant and Dec, have been appearing together on UK television from since The '90s.

Originally PJ and Duncan in Byker Grove ("PJ, Noooooooooooo!"), they moved onto music after their Fake Band on Byker Grove became Defictionalized. As pop duo "PJ & Duncan" (and later releasing further music under their actual names), they never really hit it big (however in 2013, a Throw It In performance of "Let's Get Ready to Rhumble" on Ant & Dec's Saturday Night Takeaway gave them their first and only Number 1 hit in the singles charts 19 years after the song was originally released).

They soon moved onto presenting children's TV on the BBC; their first show was a Sketch Comedy called The Ant & Dec Show. After the BBC felt they had run their course and released them from their contracts, they switched to Channel 4 for an evening show aimed at adults entitled Ant and Dec Unzipped. It didn't last long but ITV moved in and snapped them up, placing them as the presenters of Saturday Morning Kids’ Show SM:tv Live (and sister show CD:UK). Blessed with brilliant writers and allowed to let their natural charisma and improv skills shine, Ant & Dec's popularity shot upwards and soon got them mainstream gigs like presenting Pop Idol and I'm a Celebrity... Get Me Out of Here!.

At this point they felt like they had outgrown SM:tv, so they left the world of children's television to crack the mainstream, hosting a Prime Time Saturday night Variety Show on ITV called Ant & Dec's Saturday Night Takeaway, which remains their "trademark" show. Since then they've only increased their popularity, winning several awards and hosting many more Prime Time shows.

Ant is the one on the left. Dec is the one on the right.note They admitted on Celebrity Juice that this is intentional. They are seen together so often, they share an article on The Other Wiki, live next door to each other, are both insured against the other's death, and jokes are made about not being able to tell them apart — even though it's not really that tough. Ant is several inches taller, Dec has lighter hair. E.g. in Love Actually:

Advertisement:
Billy Mack: Yes I have, Ant or Dec.

They are also the only people ever to be allowed to make a joint appearance on Desert Island Discs, which is the point at which some people started to think they might actually be a Hive Mind.

The twosome frequently make each other falls into fits of the giggles and frequently imply that one or both are Gay on I'm A Celebrity: Get Me Out Of Here.

Shows they present or have presented: