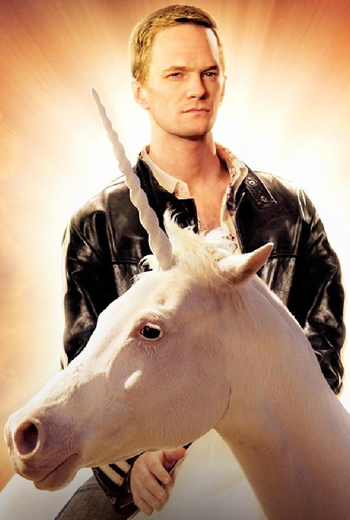 Neil Patrick Harris (born June 15, 1973 in Albuquerque, New Mexico), occasionally nicknamed NPH, got his first big break as the title character of Doogie Howser, M.D. when he was a teenager. He managed to establish himself in theater (RENT, Toby in Sweeney Todd: The Demon Barber of Fleet Street) after that, as well as taking roles in films such as Starship Troopers and Undercover Brother. He took his career to the big screen again in 2004, playing... Neil Patrick Harris, a crude Jerkass womanizer in Harold & Kumar Go to White Castle (pretty much an Up to Eleven version of the Former Child Star stereotype). He then went on to play the part of the womanizing Barney Stinson in How I Met Your Mother. Shortly afterwards, he came out as gay, and proceeded to play a singing shoe fairy in a Sesame Street cameo.

Of course, in Internet circles, he's probably most famous for his leading role in Dr. Horrible's Sing-Along Blog. He later used his musical talent to play The Music Meister in the Musical Episode of Batman: The Brave and the Bold and plays Nightwing in Batman: Under the Red Hood, and again used his musical talent as Doctor Blowhole in The Penguins of Madagascar. He worked alongside Mike Nelson on the RiffTrax of Willy Wonka & the Chocolate Factory. An episode of Adventure Time featured him as Prince Gumball, the gender flipped version of Princess Bubblegum. He's done some voice acting, lending his voice to Spider-Man in both the 2003 series and Amazing Spider-Man in Spider-Man: Shattered Dimensions. He is currently president of the Academy of Magical Arts (the famous "Magic Castle" in Hollywood, California). He is also the star of new Nerdist web show, Neil's Puppet Dreams.

For the 2015 TV season, he's hosting an American adaptation of Ant and Dec's Saturday Night Takeaway, called Best Time Ever on NBC.

On August 21, 2010 he won his first Emmy awards thanks to his stellar guest appearance on Glee and awesome hosting of last year's Tony Awards. After four years hosting the Tony's, on June 8, 2014 Neil took it up to eleven by winning the Best Actor in a Musical Tony for his performance in the title role of a genderqueer glam-rock goddess in Hedwig and the Angry Inch. He hosted the Oscars in 2015 and promptly declared, afterwards, that it would be his only time.

NPH has been in a relationship with David Burtka since 2004. In January 2010 he was voted "Gay Man of the Decade" after a fierce Twitter war against John Barrowman. It was once said of NPH that "Neil Patrick Harris is so manly, only another man could possibly satisfy him." And in the fall of 2010, Neil and David became daddies to twins.

Played Count Olaf in A Series of Unfortunate Events (2017) and was utterly fucking terrifying.

Not to be confused with Christopher Masterson (the actor who played older brother Francis on Malcolm in the Middle), who looks very similar to him.

Some roles Neil has played includes: