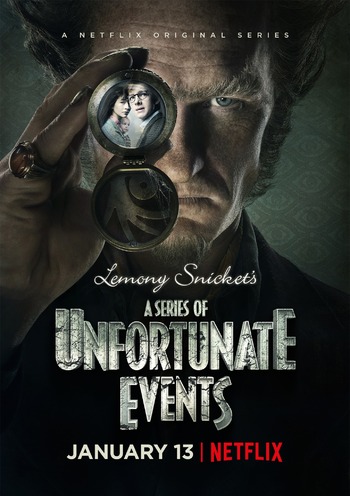 A Series of Unfortunate Events is an American gothic black comedy-drama television series from Netflix based on the children's novel series of the same name by Daniel Handler (writing as Lemony Snicket), who is also involved in the show as an executive producer, writer, and theme music composer. It stars Neil Patrick Harris as Count Olaf, Patrick Warburton as Lemony Snicket, Malina Weissman as Violet Baudelaire, Louis Hynes as Klaus Baudelaire, and Presley Smith as Sunny Baudelaire.

When Violet, Klaus, and Sunny Baudelaire are orphaned in a terrible fire, custody of them is given to Count Olaf, a distant relative. Unfortunately, the count proves to be a villainous fortune-hunter intent on inheriting the Baudelaire riches. As he and his henchpeople trail them from location to location, the Baudelaires become increasingly embroiled in a conspiracy only known to them as "VFD". Chronicling this tale of woe is Lemony Snicket, who has his reasons for following the siblings' story.

The series premiered in 2017 and ran for three seasons, adapting the entire book series over 25 episodes. The teaser trailer can be found here.

A Series of Unfortunate Events contains examples of:

That's Not How the Story Goes

The show's characters, including Snicket himself, sing to the viewer that the story is rather depressing and won't go the way they think.

That's Not How the Story Goes

The show's characters, including Snicket himself, sing to the viewer that the story is rather depressing and won't go the way they think.