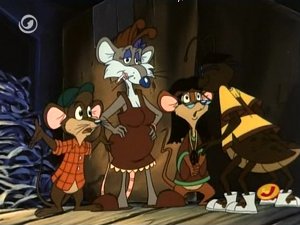 Capitol Critters is an animated television series created by Nat Mauldin, Steven Bochco, & Michael Wagner and produced by Hanna-Barbera. It chronicles the lives of mice, rats and roaches who reside in the basement and walls of the White House in Washington, D.C.. The series was produced by Steven Bochco Productions and Hanna-Barbera Productions, in association with 20th Century Fox Television for ABC, which aired seven out of the show's 13 episodes from January 31 to March 14, 1992. Cartoon Network began airing all 13 episodes in 1995.

The series' first episode began on a Nebraska farm, which was also home to a family of mice, including a young mouse named Max. While the mice were on a trip outside to gather some corn, exterminators arrived to eliminate the mice. Once Max noticed the exterminators from a distance, he quickly returned to the basement. There, he witnessed the death of his entire family. Before Max's mother was killed after a failed rescue attempt, she told him to leave for Washington, where his cousin Berkeley could be found. Upon his arrival in the nation's capital, Max encountered a rat named Jammett, who resided along with Berkeley in the White House basement. After meeting Berkeley, Max met a former lab rat named Muggle and Jammett's mother, Trixie, who allowed Max to share her son's room.

A new set of cats (presidential and vice presidential) were just beginning to be a nuisance for the mice before Max's arrival. Also, the familiar sight of rat poison was a part of Max's life in his new home. When death appeared to be his fate, a cockroach named Moze came to his aid and brought him outside the White House basement. When Max returned to the basement, the sight of Muggle unconscious brought back terrible memories that caused him to run outside toward a presidential helicopter preparing to take off. Jammett managed to join Max on the helicopter before returning to the White House, giving the two plenty of time to know each other better.

This show was one of a trio (joining Family Dog and Fish Police) of animated shows from the Big Three networks (ABC, CBS, and NBC) trying to cash in on the early 1990s success of FOX's The Simpsons by making a primetime animated show that looked like Saturday morning fare, but had social satire and adult themes.