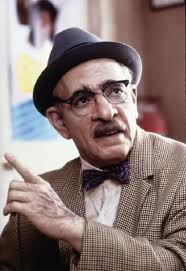 A senior citizen with a Yiddish accent. In fiction, Yiddish accents are common for old characters, even if their families are of a completely different culture. Alter Kockers are most common in comedies, due to the influence of Jewish comedians. Many Borscht Belt comics had immigrant parents with thick Yiddish accents. Sometimes, a character shown in the future or undergoing Rapid Aging will inexplicably gain a Yiddish accent and stereotypical Alter Kocker mannerisms, following Rule of Funny. Truth in Television, nearly all depictions of the Yiddish accent are spoken by older characters, particularly those who reached adulthood before 1945, due to cultural assimilation and the destruction of much of Europe's Jewish communities, leading to Yiddish no longer being commonly spoken among secular Jews in the United States.

Now that the older generation of Yiddish English speakers have almost died out outside of Hasidic communities, newer depictions often swap out the Yiddish accent for a working-class New York one with the occasional Yiddish word dropped in; the second and third generations are alter kackers now.

Incidentally, the phrase alter Kacker literally means "old shit[ter]." It's the Yiddish equivalent to the American slang phrase "old fart." Also incidentally, it means the exact same thing in German (Yiddish is closely related to German), though they mostly defecal it into alter Knacker which just means "old geezer".