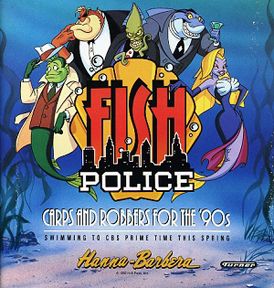 Originally a comic book series by Steve Moncuse. In 1992, Hanna-Barbera made a prime time animated series for CBS in order to compete with The Simpsons. Sadly, this show only lasted 6 episodes.
Advertisement:

Not to be confused with game wardens nor Abe Vigoda's character of Philip Fish.

Basic plot: Anthropomorphic fish precinct detectives fight crime. It doesn't get any more highbrow than this, folks. Ranked #45 by the book What Were They Thinking? The 100 Dumbest Events in Television History, the highest ranking for any animated show in that book.

Compare Sharky And George, a French show with a similar premise.