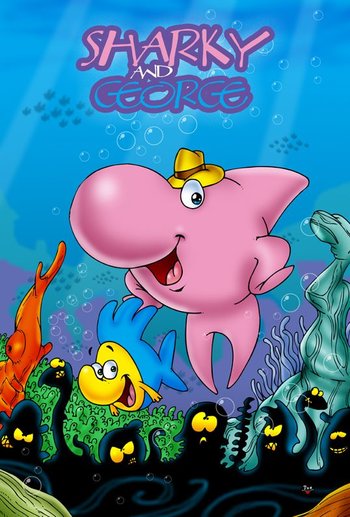 Sharky And George were the crime busters of the sea!
Sharky & George (Original name Sharky et Georges) is a French and Canadian children's TV cartoon, produced by animation studios CinéGroupe and Label 35 between 1990 and 1992. The series consisted of fifty-two 25 minute episodes. The series was later translated into English and shown in the United Kingdom.

Sharky & George is set in the underwater city of Seacago, populated by various kinds of fish. The protagonists are two fish private detectives who run their own agency. Sharky, the bigger fish, is a pink shark and wears a Humphrey Bogart-style fedora hat. George, the smaller fish, is blue with a yellow face, and is younger than Sharky. Together the two friends combat the mad plans of conquest of the many villains and gangs that are terrorizing Seacago.