Film / Take the Money and Run 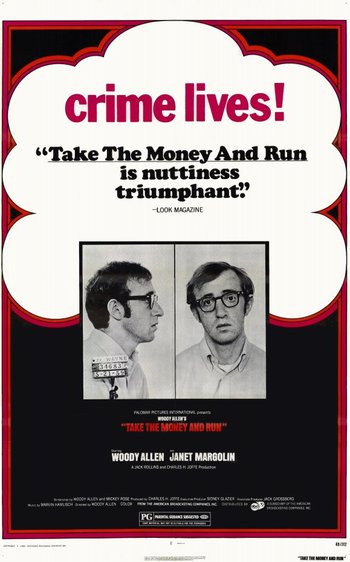 Crime has rarely been this silly.
"On December 1, 1935, Mrs. William Starkwell, the wife of a New Jersey handyman, gives birth to her first and only child. It is a boy, and they name it Virgil. He is an exceptionally cute baby, with a sweet disposition. Before he is 25 years old, he will be wanted by police in six states, for assault, armed robbery, and illegal possession of a wart."
— Opening Narration
Advertisement:

Take the Money and Run is a 1969 Mockumentary comedy co-written by Woody Allen and Mickey Rose, which marked Allen's full-fledged directorial debut.note Allen had directed What's Up, Tiger Lily?, a Gag Dub of a Japanese spy flick, in 1966.

The film chronicles the life of Ineffectual Sympathetic Villain Protagonist Virgil Starkwell (Allen) and his wife Louise (Janet Margolin). Through exclusive interviews with his family, friends and teachers, we learn more about Virgil’s past, upbringing, and his love of crime and the cello.

Take the Money and Run was a monumental turning point in the shaping of the mockumentary genre; while earlier mockumentaries attempted to present a fictional story as if it were true, this film went out of its way to parody the style of actual documentaries at the time, even hiring veteran voice actor Jackson Beck to serve as The Comically Serious narrator. Scenes play out with individual gags strung together by a thin story, with plenty of Visual Gags and Inherently Funny Words being used to deliberately rid the movie of any dramatic tension.

The film received critical acclaim, cementing Woody Allen’s Auteur License that he has enjoyed for the rest of his career. Allen would revisit the theme of Stupid Crooks in Small Time Crooks.

Take the Money and Run provides examples of: