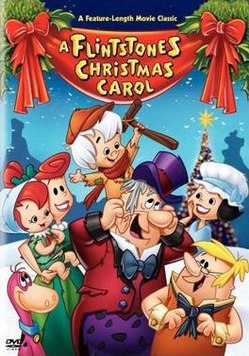 A Flintstones Christmas Carol is a 1994 syndicated TV movie based on the television series The Flintstones.

The plot centers around the Bedrock Community Players putting on a stage production of A Christmas Carol, with Fred Flintstone cast in the leading role as "Ebonezer Scrooge". But Fred's constant rehearsals for his part begin to rub off on his character as he forgets to buy his family Christmas presents, leaves Pebbles all alone at cave care and treats his friends like "supporting players" and ends up learning the true meaning of Christmas as he performs on stage.

A return to the normal characterizations and ages of the Flintstones's main cast, this is not to be confused with the 1977 special A Flintstone Christmas (where Fred fills in for Santa) or the previous year's A Flintstone Family Christmas (the final installment of the 1993 trilogy of TV specials where Pebbles & Bamm-Bamm marry and have kids.) Notable as the last animated Flintstones production (Cave Kids and short films aside) before Hanna-Barbera was merged into Warner Bros. Animation in 2001.

This special includes examples of: