Not Me This Time 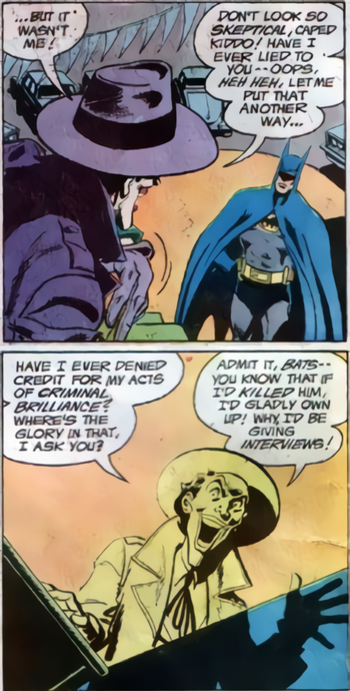 It's a bad sign when the Joker is making sense.
"Oh, for crying out loud, no! I had no intention of committing any crimes! ...today."
— Mojo Jojo, The Powerpuff Girls, "Telephonies"
Advertisement:

In a series with a recurring Big Bad, it is sometimes the case that a side-villain or Monster of the Week is introduced to cause havoc and shake things up.

Of course, since this is a series with a recurring Big Bad, our heroes may feel perfectly justified in going after the usual suspects. This trope refers to such scenes, in which our regular villain is forced to inform the heroes that this installment's Evil Plan is not their doing. This may or may not be believed at first, but after the villain's innocence is established, expect them to curtly dismiss the heroes.

Traditional Truce Zone requirements mandate that regardless of all the crimes they committed yesterday, if caught for the wrong thing today, the heroes have to let them go. Either that or the Big Bad got Off on a Technicality for yesterday's crimes. Another possibility is the usual villain not having been defeated yet - and the heroes don't want to waste time and resources on beating him right now, in the middle of a crisis.

This trope can be chalked up to The Law of Conservation of Detail: if you're going to have your villain appear, it might as well be relevant to the plot at hand.

An occasional subversion is for the usual suspect to claim innocence, convince the hero that somebody else did it... and then have it turn out that the original suspect is guilty after all. In some cases, the Frame-Up inspires the villain to actually do it afterward.

This trope may also occur with any character who has a recurring habit. It may or may not lead to Evil Versus Evil or Enemy Mine, depending on the story. A villain might be upset that they were blamed and maybe even suffered a beatdown for something they didn't do. Or that a plan of their own got thwarted because of the false accusation that made the hero seek them out. Or that they were accused of a crime they consider beneath themselves or almost denied a triumph they seek for themselves. Any of these reasons is enough for them to be pissed at the person who really did it.

Also see Villains Out Shopping, which might explain the villain's innocence. Compare Guilty Until Someone Else Is Guilty, and Motive Misidentification, where the Big Bad is responsible, but for different reasons than the heroes initially suspect. Contrast Insists on Being Suspected, when they were never suspected in the first place, and Hijacked by Ganon, where it seems like a new villain is at fault but the Big Bad is revealed to be pulling the strings. May overlap with Card-Carrying Villain and/or Villains Never Lie if the heroes believe the story because it would be out of character for the villain to deny his crimes rather than boast about them.