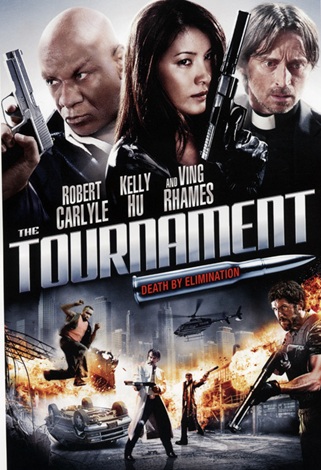 "It must be tough playing God with people's lives."
"30 contestants... 24 hours... one rule - kill or die. Ladies and gentlemen, place your bets. The Tournament has begun."
— Mr. Powers
Advertisement:

A 2009 straight to DVD film starring Robert Carlyle, Kelly Hu, and Ving Rhames, The Tournament is a game in a similar vein to Battle Royale - the characters are clearly drawn from both it and imitation The Condemned.

The Tournament itself is an event staged every seven years. Thirty of the world's greatest assassins are gathered in one place, where they kill each other to the last man. The title of "World's Greatest Assassin" and lots of money is the official prize, but naturally most of the competitors are doing it for other reasons specific to them. This time around, things have been spiced up with a 24 hour time limit and the inclusion of a former champion - whose wife was murdered by a competitor this time. It's Personal.

A little known film, reviews are sparse, and seemingly mixed. Despite the Follow the Leader premise and clear Cliché Storm, it remains entirely watchable, however.

The Tournament contains examples of:

"We must give thanks to the sorrow that shows us pity, to the pain that teaches us courage, and to the mystery which is a mystery still."