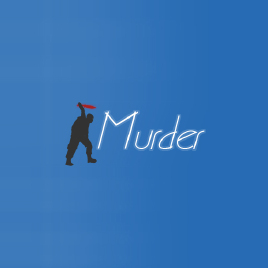 Try not to get stabbed too early, okay?
Advertisement:

Murder! is a game mode featured in Garry's Mod, based around, well, MUUURRRDDERRRRRR.

In each round, a single Murderer spawns. They are equipped with a knife that will kill anyone they smack it with in a single hit, and is completely silent. Their objective is to kill everyone else.

And by everyone else, we mean a bunch of completely defensless Bystanders that must explore the map in search of different items called clues that glow green. When a number of clues are gathered, the Bystander who collected them is given a Magnum that will kill the Murderer in one shot — but has a long reload time, and only fires one shot. A Bystander will also spawn with one at the beginning of the round, and their decision to brandish it or save it can either lure the murderer to them, getting a good shot, or forcing the murderer to be more careful around them. If they die, then the gun drops — if another Bystander can pick it up, they'll be armed.

If a Bystander with a gun shoots another innocent Bystander, they'll be severely incapacitated for a good 30 seconds, at which point they're ripe for a shanking. Be warned, however, that everyone is given codenames (which can be customized per server) and has a radial voice menu that can say jokes, sad musings, questions, and screams of terror.

A large amount of the fun in the game is the interactions between the different people, and the sheer terror of seeing someone brandish that terrifying knife.

The game mode can be found for free in Garry's Mod 13. See also Melonbomber, another gamemode made by the same user. Compare and contrast Trouble in Terrorist Town, which is very similar, and slightly more popular. The game has a Spiritual Successor in the form of Homicide, a game mode for Garry's Mod which takes many ideas from this game and adds a new twist to it.