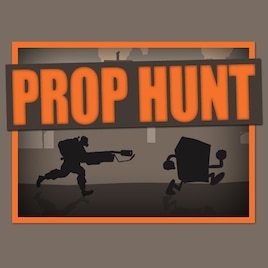 A Game Mod of Garry's Mod turned official game mode, Prop Hunt is easily one of the most common fan created modes for any game that allows for custom mode creation ever, being essentially an online version of hide and seek. Only with guns and props. The mod was also ported to other Source Engines games, notably Team Fortress 2, and is somewhat popular on community servers.

At the start of each round, players are put on one of two teams: Props and Hunters. People on the Props team have the power to turn into ostensibly inanimate objects, which allows them to attempt to disguise themselves. Hunters are given a full load-out of guns and other weapons, and have to try and kill the Props. However, the Hunters lose health if they attack an object that isn't a disguised player, meaning they have to be careful. If the Hunters kill the Props, they win. If the Hunters end up dead or the time runs out, the Props win.

The Team Fortress 2 variant works slightly differently to that of the Garry's Mod version. As the seeker, you can pick any class (except Spy) with any secondary melee weapon. note  Engineer is generally the exception, unable use his Sentry, but he can use his Dispenser and his primary. Once the props have found their hiding spots, the same rules apply as above. Props also move as fast as scouts do and running over Control Point(s) refills your health (be you a hider or seeker). Hiding (and staying) in one spot is a wise strategy for most players, as the maps used are claustrophobic and props are, by TF2's design, much larger than found in Garry's Mod Prophunt. Once there's one prop left on the field, the last man standing is then allowed to use whatever their primary gun is in their Scout loadout. note Because the props are scouts "disguised" as props. Prop-switching is generally turned off too, so good luck being disguised as a Control Point...

The original version of the game mod can be found here

This game mod provides examples of: