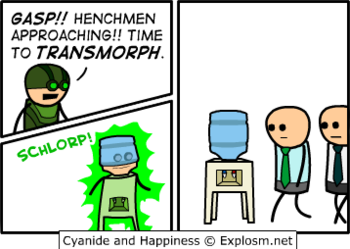 Most shapeshifters tend to prefer transforming into organic life-forms, taking the shape of animals, monsters, fellow human beings and other entities. Similarly, when it comes to characters with the power to transfigure others via the power of magic or highly-improbable science, it's very common to for them to chose the shape of an animal to the exclusion of all others.

And then you have these guys.

Regardless of whether they're experts in transforming themselves or others, they have the ability and the inclination to make someone into an inanimate object. The reasons vary: perhaps becoming an object is more useful for camouflage than that of an animal; perhaps a Baleful Polymorph scenario involving an inanimate item will be harder to cure.

However, unless Animate Inanimate Objects are in play, this may be an easy recipe for A Fate Worse Than Death.

A Supertrope of Chest Monster and Toy Transmutation. May overlap with Equippable Ally, depending on exactly how said ally is equipped. See also Taken for Granite and Transflormation, which involve very different kinds of inanimate transformation.