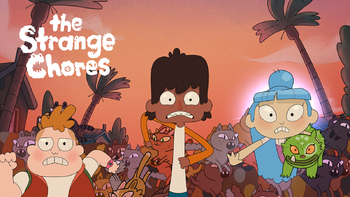 The Strange Chores is an Australian animated series released in 2019. It was created by Charlie Aspinwall and Daley Pearson, (who are best known for their work on Bluey). Season 2 premiered on June 24, 2022.

Charlie and Pierce are two friends who discover that their odd neighbour's house at the end of their street actually houses a portal to supernatural worlds. Said neighbour, Old Man Helsing (Nick Tate), feels that he has gotten too old for his adventures there so he starts training them to be his apprentices. They are accompanied by Que, a mischievous ghost girl, as they complete Helsing's tasks.

Tropes In This Series: