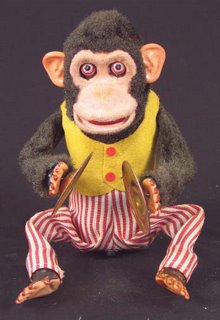 Vests are cool. Cymbals are cool. Monkeys are cool. Toys are cool. Combine all four and it should also be cool, right? WRONG. In fact, it's so creepy, that versions of this mechanical monstrosity end up in a lot of sci-fi/horror movies. Kind of the flipside of Silly Simian. If you see this one, you know the non-fun sort of weird is on the way.

Given that monkeys resemble humans (being a related species), the Uncanny Valley might have something to do with why these toys are so unnerving. The often deranged-looking yellow and red eyes further accentuate the creepiness. Compare with Creepy Doll.

Can also be used for comedic effect, usually by having the monkey replace a person who is even more incompetent at the job in question.

The Monkey is the eye in the sky. He sees everything, and is the one thing keeping the toys from escaping Sunnyside.

The Monkey is the eye in the sky. He sees everything, and is the one thing keeping the toys from escaping Sunnyside.