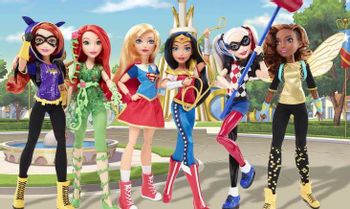 "We actually started by calling them 'action dolls', and a lot of the parents said, 'why call them dolls? They’re really just figures.' They’re just a little bit more relevant for a 6-12 year old girl. But they’re figures, like my boy would play with — and hopefully boys and girls will play with the figures together. The way that we’ve designed it is so that boys will be as interested in it as girls. The way that boys and girls play with figures — we did a lot of research on this — was very similar. They wanted similar types of powers, similar types of play patterns. Girls just wanted to identify with it and relate to it in a more specific way. Those are the tweaks that we made to make it more relatable to a girl.."
—Tania Missad, Mattel Consumer Insights Director
Advertisement:

Created by the cooperation between Mattel, DC Comics, and LEGO, the DC Super Hero Girls franchise features an accompanying toy line based on the graphic novels, direct-to video movies, and web series. The first wave debuted in early 2016, bringing out 12" dolls and 6" action figures based off six out of the 7 main heroines (Wonder Woman, Batgirl, Poison Ivy, Harley Quinn, Supergirl, and Bumblebee; Katana was originally excluded, but resurfaced in her figure debut late 2016). Roleplay toys also debuted around the same time.

The toyline (and accompanying non-electronic products) feature the following: