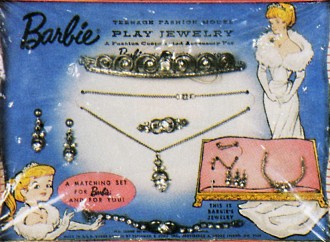 If sold today, this would include a girl's size evening dress and fur wrap.
Advertisement:

The company for a work sells costumes or accessories based on their work, so that fans (usually younger kids) can dress up like their favorite characters. Obviously, this includes those annual assortments of official Halloween costumes based on the year's current movie blockbusters and whatnot, but some of these items are produced and available year-round.

Now actual Cosplayers almost never get involved with this stuff, unless either companies offered tailoring services, perhaps, or it's to take apart and reconstruct with more expensive material and more accuracy.

This can also overlap with Defictionalization (if gear is made based on a Show Within a Show or in the case of working examples of said gear), Sexy Whatever Outfit.

A Sub-Trope of The Merch.