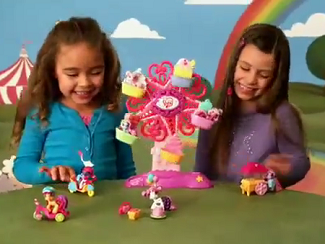 Because everyone has a green table and a wall with rainbows, clouds and circus tents painted on it, right?
This trope applies to any Toy Commercial featuring children (often, but not always, boys), using an elaborate play setup unrelated to, and often more interesting than, the toys themselves.
Advertisement:

For action figures, the children have set up an elaborate play environment made of rocks and sticks that must have taken hours more to assemble than the 30 seconds seen that it took to play in. For toy cars, the children have a kitchen that has over wide stretches of spotless,note After all, if Mom had just mopped it, the kids probably wouldn't be playing on it. uninterrupted linoleum or going through a dirt track a little too obviously built by an adult.

This is not to say that there aren't kids out there who make their own playsets, but the trope is to make the toys seem even more exciting to the potential buyer. Toy manufacturers sometimes put a disclaimer to the effect of "background set not available" at the bottom of their commercials if they're playing this trope straight.

A subtrope of Rule of Cool. Pops up in Fridge Logic. Compare to Adjacent to This Complete Breakfast where unhealthy food is displayed next to healthy to make you associate the two.