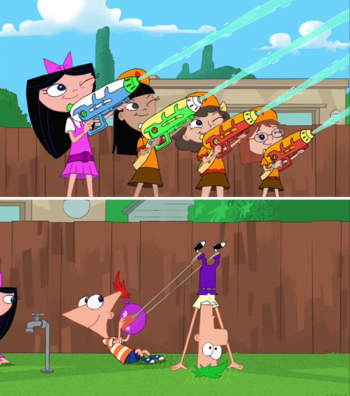 It's all fun and games until the water's yellow.
The Weapon of Choice for the Bratty Half-Pint and Youngsters. Water Balloons may be used alongside slingshots.
Advertisement:

The contents will not always be water — it could be jelly, ink, a drink, or something more... foul. Either that or some jerk will bring out the hose.

Expect college science geeks and/or medical students with too much time on their hands to build a water balloon slingshot out of lab materials, or some other ridiculous contraption. They might also fill their water guns with liquid chemicals.

Wet T-shirts and swim suits may lead to Sexy Soaked Shirt. If the water in question happens to be in any specific way lethal to an adversary (and what better way to wield it), see also Kill It with Water.

Splatoon 2's most basic weapon, the Splattershot, is a water gun designed to shoot ink.

Splatoon 2's most basic weapon, the Splattershot, is a water gun designed to shoot ink.