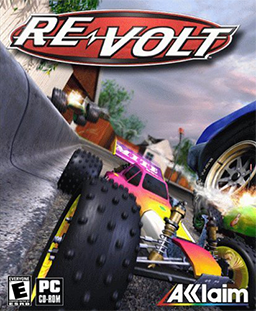 Re-Volt, released in 1999 by the now-defunct Acclaim Entertainment on the PC, Nintendo 64, PlayStation and Dreamcast, is a unique approach to the racing genre. It pits radio-controlled cars against each other in a series of realistic and not-so-realistic tracks while using Mario Kart-style pickups. The gameplay is unique due to the physics engine that successfully emulated RC car movement. It has a related game titled RC Revenge which is its Spiritual Successor.

The game itself wasn't a big hit on the market (to the point of being classified as abandonware until its digital Updated Re-release), but it has given way to a cult following that exists to this very day. Eleven years from when it was first released, new cars, new tracks and even an online multiplayer client have been developed, and the Re-Volt community brought new life to Re-Volt with the fanmade 1.2 patch. Big Bit Interactive then bought the rights of Re-Volt, and made an iOS port of it, but then, later, a Korean company they call themselves "WeGo Interactive" bought the Re-Volt rights from Big Bit, and they developed an Android version. Little did the Re-Volt community know WeGo was planning on a Re-Volt "sequel", also for Android... however, it is literally the same game, but with Freemium content and annoying English voices with Korean accents playing while you race. The Re-Volt community now treats WeGo as a threat to them, as WeGo has already made a lot of stupid mistakes like stealing the community's fanmade 1.2 patch, and it sending it GOG.com. Luckily, GOG listened to the RV community, and took down Re-Volt. In 2017, WeGo silently went defunct along with all their games.

As of currently, Re-Volt is being further updated with "RVGL"

, an open source, cross-platform re-written codebase meant to supersede v1.2, allowing for modern systems to have easy compatibility with the game.

Many details and resources can be accessed on the Re-Volt.io