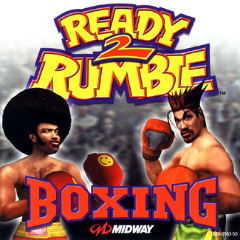 Ready 2 Rumble is a series of cartoony arcade boxing games released in 1999, starting with Ready 2 Rumble Boxing in 1999. Developed by the now defunct Point of View Inc. (except for Ready 2 Rumble: Revolution, which was developed by AKI Corporation USA) and published by Midway, the game was incredibly popular for the Sega Dreamcast console, even though it wasn't an exclusive.

The game was notorious for its "Rumble Meter" system, which, when taunting your opponent(only in the second game. Taunting in the first game did nothing.) or landing a heavy hit, gave you letters to let you initiate a Super Mode for the boxer of your choosing. It also featured famous ring announcer Michael Buffer to introduce the characters and say his well-known phrase "Let's get ready to rumble!" Finally, it had an in-depth Championship Mode in which you trained your boxer, competed in prize fights, and eventually earned your title.

Has a character sheet under construction.