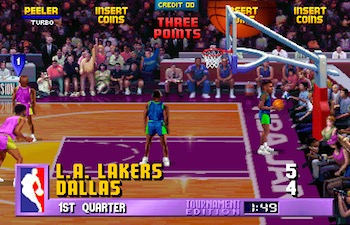 NBA Jam is a two-on-two basketball game that was released in the arcades (by Midway Games) and 16-bit consoles (by Acclaim). The game is notorious for its insane dunks and equally insane catchup. The game became a phenomenon when it was released in 1993, earning over a billion dollars in quarters over its lifespan. An Updated Re-release titled NBA Jam: Tournament Edition quickly followed, with new players, stat tracking, and hidden players. In 2010, EA would release NBA Jam on the 7th-generation consoles with two iterations: the first one (simply called NBA Jam) was released in 2010, with the On Fire edition released the following year.

After TE, Acclaim won the rights to use the NBA Jam name and used it to make basketball games until its demise. Midway, meanwhile, made several games that took the Jam formula and expanded on it. These games were NBA Hangtime and its Updated Re-release NBA Maximum Hangtime; NBA Showtime: NBA on NBC, which took the series into 3D and used a presentation based on NBC's basketball airings, and NBA Ballers, an answer to EA's NBA Street series.