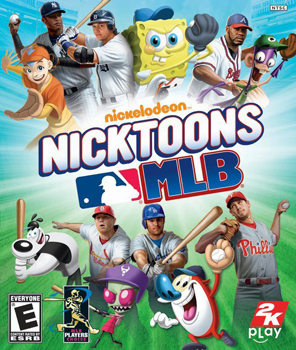 Yes, this is real. Yes, this was sold.
Advertisement:

Nicktoons MLB is a baseball game for the Xbox 360, Wii, DS, and 3DS. that features both Nickelodeon's Nicktoons and real life MLB players. It was developed by High Voltage Softwarenote The DS and 3DS versions were developed by Black Lantern Studios and published by 2K Play. It is pretty much a Spiritual Successor to 2K Games' arcade baseball game The Bigs, to the point that it actually runs on The Bigs' engine.

The game features all 30 MLB teams and the following 23 Nicktoons charactersnote 25 in the 3DS version: