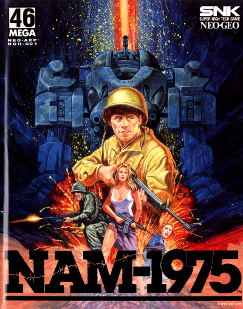 The roar of the helicopters overhead snaps us back into reality. We will never forget the nightmare of that summer...

NAM-1975 is a Cabal-esque shooting game developed by SNK for the Neo Geo in 1990. Going by its serial number, it is notably the first game developed for the system.

During the final months of The Vietnam War, two American soldiers, Silver and Brown, reenter the war to rescue Dr. Richard Muckly, a US Army scientist who has been kidnapped by the Viet Cong along with his daughter Nancy.

This game is one of those Cabal clones. It's also rather unusual for a Vietnam War video game, because the VCs are equipped with anachronistic, not to mention sci-fi weapons or vehicles.