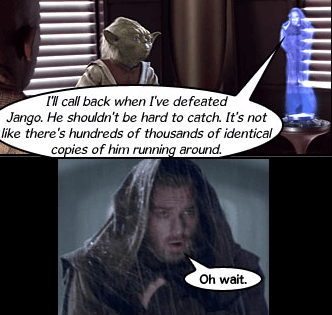 Marty: Well, if you're so sure you're indispensable maybe you should run for [condo board] president. Oh, wait — you did. Five times.
Frasier: They wouldn't love you so much if it weren't for my ideas!
Marty: Right, because you need a Ph.D to think of repainting the lobby. Oh, wait — you don't.
Frasier: Would you stop doing that!
Marty: You're right. It's not an effective way to argue. Oh, wait — it is!
— Frasier
Advertisement:

When a character presents a hypothetical scenario, then sarcastically says something like "Oh, wait!" and observes that it's actually true. Usually used to present a Take That!. Different from That Came Out Wrong in that the character knows full well what he said. Has nothing to do with Hey, Wait!.

Many of the examples below are not actually "Hypothetical — oh wait — that's true!" Alternate forms include "Reasonable plan — oh wait — we can't because of something obvious." Or, "Blatant lie — oh wait — truth." All three are sometimes used as a real-life sarcasm tag, often overlapping with Don't Explain the Joke. Explain, Explain... Oh, Crap! is when someone, to their horror, does it to themselves.