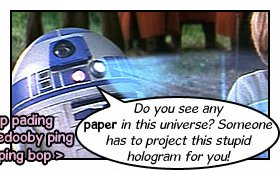 It's either that or data tapes.
"Every time someone says we're becoming a paperless society, I get ten more forms to fill out."
— Dr. Hobbs, Babylon 5
Advertisement:

The future is full of data drives, backups, often made of Organic Technology or crystal, and holographic terminals. No paper though, even if we still have trees around. The danger of having no hard copies of information seems lost on folks. This vision of an entirely digital future hearkens back to the 70s and 80s, when the increasing popularity of the home computer and email led many to believe that soon paper would be made obsolete by the ability to transfer and access hundred-page documents instantly on portable computing devices. Ironically, as the years went on, the growing use of fax machines and printers meant paper was in higher demand than ever before. However, by the 2000s, the growing trend was towards everything being digital, and the rise of e-books threatens to make a No Paper Future a reality (despite the no hard copies risks).

Another way to tell it's the future is to make money 'weird', if not get rid of it. This is a Justified Trope in the United States and a few other First World countries, since now many of us really do pay with cards to transfer sizable amounts of money when possible (and preferable). For now it's still more practical to bring money for smaller transactions, to save the 20 or 30 seconds to sign a receipt or key PIN; yet even now, swipe-and-go smart cards that can be much faster than handling messy physical change are spreading.

This trope usually presumes the complete elimination of the Black Market or illegal transactions, as, obviously, drug dealers are not going to be interested in transactions that leave a paper data trail. Ditto for people arranging transactions to evade or avoid taxes or purchase something they'd rather not admit to; cash has no trail, electronic money does. Bitcoin and other cryptocurrencies are a thing, of course, but keep in mind that for most works using this trope cryptocurrencies didn't exist when they were made. But then the government decides how money is done, so who cares about the criminals? (Let's not dwell on the obvious answer to that question which is shown every time a newspaper presents news about political scandals involving large bribes...)