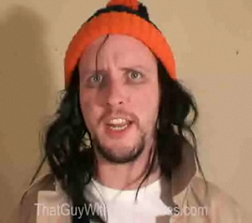 "Hello! Am I on the intermanet?!"
"OH MY GOD, THIS IS THE GREATEST MOVIE I'VE EVER SEEN IN MY LIFE!"
— Chester A. Bum, on nearly every movie he sees in his life.
Advertisement:

And now it's time for a trope description, with Chester A. Bum. Tonight's page... "Bum Reviews".note OH MY GOD, THIS IS THE GREATEST TV TROPES PAGE I'VE EVER READ IN MY LIFE!

Chester is a homeless guy who reviews current movies on Channel Awesome. Since he's just happy to be in a warm building while seeing them, he likes almost every movie he sees.

This character was partly inspired by Doug Walker's first video review of the first Transformers, where he acted very enthusiastic, and by Doug's silly voice in his review of Cloverfield.

Doug usually lets the viewer know his real opinions on the movies. Older episodes had a "Seriously..." message on the ending card, while newer episodes are each accompanied with a separate review vlog where he can go into more detail. This became the basis for a new webshow called Sibling Rivalry, where he and his brother Rob will discuss the movie (if Rob has seen it).

The theme music is Minuet in A Major by Boccherini in a parody of Masterpiece Theatre.

"This is Chester A. Bum saying, CHANGE? YA GOT CHANGE?! AW, C'MON! HELP A GUY OUT, WOULD YA? C'MON, CHANGE!
...COME ON! I'LL EVEN RAMBLE ON ABOUT A DIFFERENT THING EVERY EPISODE WHILE THE CREDITS ROLL! My voice is pretty sexy."