Film / The X-Files: I Want to Believe 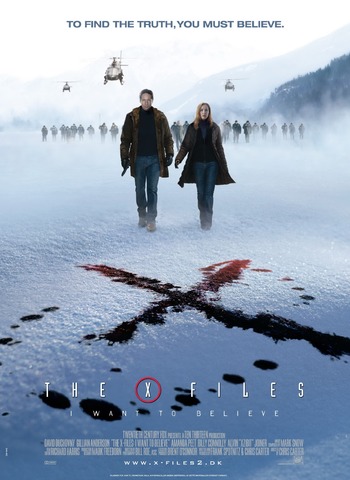 "The voice of God speaking through a man - I think that's been a winner a few times."
Mulder: I once investigated a series of cases involving unexplained phenomena for the FBI.
Father Joe: So you believe in these sort of things?
Mulder: Let's just say I want to believe.
Advertisement:

The X-Files: I Want to Believe is the second feature film based on The X-Files, released in 2008 (a full ten years after the first).

It features series protagonists Fox Mulder and Dana Scully long after they abandoned the FBI and the X-Files; Scully is a doctor at a Catholic hospital concerned about the treatment options offered to a dying boy, and Mulder, still on the lam, lives as a hermit under Scully's protection, doing little more than collecting paper clippings. They are offered a chance at redemption, however, when the FBI requests their help in finding an old comrade, who has herself gone missing while investigating a series of mysterious disappearances. They are aided by an ex-priest and convicted pedophile named Father Joe (Billy Connolly), who claims to receive psychic visions of the victims directly from God, and about whom the agents have conflicting feelings.

The film is a stand-alone work in the tradition of the show's Monster of the Week episodes, and does not revisit the series' famous — and still unresolved — Myth Arc.

The X-Files: I Want to Believe contains examples of:

"I think maybe the darkness finds you... and me."
Feedback

The X-Files: I Want to Believe

Cold environments are shown alongside production photos, while a new theme remix plays.

The X-Files: I Want to Believe

Cold environments are shown alongside production photos, while a new theme remix plays.