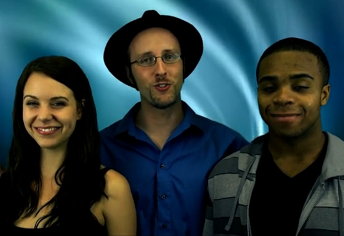 "We don't make films. We remake them."
Advertisement:

Demo Reel was an original web series for Channel Awesome. Starring Doug Walker, Rachel Tietz and Malcolm Ray (who would later appear in The Nostalgia Critic alongside Doug when Doug resumed making more episodes), it was Doug's next big series, succeeding The Nostalgia Critic. It is notable in that it was filmed in a proper Chicago studio, rather than in Doug's basement as The Nostalgia Critic was.

The story revolves around Donnie DuPre (played by Doug), the founder of an independent film studio called "Demo Reel", who remakes famous films bad on purpose for reasons later disclosed. He is joined by Rebecca Stoné (Rachel) (note that her name is pronounced "stone"; the accent is silent), an actress who's been burned by how Hollywood treats women; Tacoma Narrows (Malcolm), an up-and-coming writer who thought Donnie would get him some fame; and cameraman Karl Copenhagen and make-up artist "Quinn", East German and Irish nationals respectively.

. The series was cancelled

on January 22nd, 2013, in favor of resuming The Nostalgia Critic, two weeks later.

Later Brad Jones' Demo Reel was made as a spoof

We don't write tropes. We rewrite them: