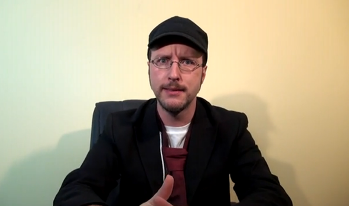 Demo Reel along with it. Episodes resumed February 5, 2013, with reviews on a fortnightly basis, though now with editorials and mini-reviews on the weeks in between, and no cutoff date. The show also took on Malcolm Ray and Rachel Tietz, who played Tacoma Narrows and Rebecca Stoné on Demo Reel, respectively, as co-stars with skits done in between the reviews. In 2014, Tietz left the show to pursue an acting career in California, saying goodbye to the fans in the review of Face/Off, and was replaced with her friend Tamara Chambers, who had previously appeared in the review of Catwoman (2004). Tamara's own series, Tamara's Never Seen, where she reacts to popular movies she had never seen before, and "Tamara Just Saw", where she reacts to movies still in theaters, has gotten its own page. In 2017, after several years where the mini-reviews were framed or categorized as editorials, fuller-sized but not fuller-produced reviews began appearing in the in-between weeks once again.

Sound Waves of the Heart

Sound Waves of the Heart