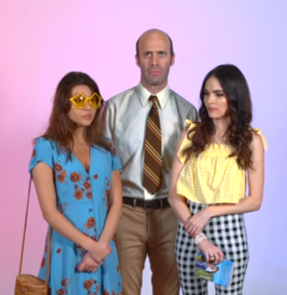 From left to right: Daughter, Dad, and Mom.
Hi, I'm Dad, welcome to my channel. Dad is the best YouTuber in the universes, and the best pop-star.
— From Who Is Dad?
Advertisement:

Starring the character of Dad, as played by Barnatt, the series has a variety of content, including:

However, despite the innocuous set-up, Dad does have a plot and sets up a mystery for the viewers, which every video hinting at some deeper backstory, giving clues as to the true nature of Dad and his family, and/or containing codes for viewers to crack. It turns out that Dad might not be what he seems... and nor is anyone or anything else.