Best Known for the Fanservice 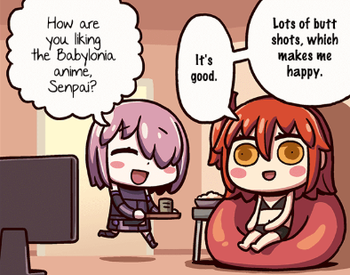 Gotta get a load of that anime's Unlimited Booty Works.
"Catwoman is a movie about Halle Berry's beauty, sex appeal, figure, eyes, lips and costume design. It gets those right. Everything else is secondary, except for the plot, which is tertiary."
— Roger Ebert
Advertisement:

It could have had great humor, brilliant action sequences, diabolical villains or even philosophical ideas that could make you think. What everyone remembers, however, is the female lead's striptease in the Sweeps one year. Or, in an even more extreme case, a penis when it pops up on-screen. This trope refers to the actions of characters rather than characterization.

This is the common tendency for fanservice to overshadow everything else about a work, regardless of the amount that actually occurs in it (sometimes the most remembered bit of fanservice actually comes from promotional materials, which don't accurately depict what actually happens in the show). This can be so powerful and effective in Hollywood that the Hollywood Hype Machine will go into overdrive and make an actress who bared all (or most) of herself an instant, overnight household name. Don't laugh—Shannon Elizabeth and Denise Richards got years of movie roles because of this trope thanks to American Pie and Wild Things respectively. At times this effect can become self-perpetuating: the mainstream audience first discovers a work due to its fanservice, and when word starts to spread about it, the fanservice is what newcomers hear about first as well. Ultimately, large portions of the public may end up knowing nothing else about the work.

Of course, one person's fanservice is another's Fetish Retardant. This is particularly prominent ("for some reason") any time there's a dude on full display in a work with any meaningful proportion of straight men in the audience. But hey, remembered positively or negatively, it's all the same in the end—hype is hype. Such inversions go below all the same.

For the more romantic equivalent, see Most Fanfic Writers Are Girls. When viewers watch a show specifically for fanservice, they're Just Here for Godzilla. See also Fanservice Extra and Dancing Bear. One-Scene Wonder is a similar phenomenon, but mostly unrelated. If the fanservice is controversial, the work may be Overshadowed by Controversy. Can result in Audience-Alienating Premise if it's more than just one or a few scenes. See also Signature Scene, which is often this. A subtrope of Never Live It Down.

Jiggle Shows rely on this trope for their success since they heavily rely on Fanservice.

Crosses over into Truth in Television, as there are many, many films, TV series and literary works that are known primarily for sex scenes or other suggestiveness and not for their plot, acting, etc. And this often extends to the actors and writers, not all of whom are pleased to be associated forever with a particular scene. Some admittedly don't care or take an I did it for the art approach (these folks are more likely to vehemently defend the decision in interviews even years later); others express regret and treat it as an Old Shame (see also Never Live It Down), especially if their career has evolved in the direction of more prestigious or family-friendly productions or if they have found themselves typecast into a certain type of role as a result. The tendency of the media and Internet communities to fixate on fanservice aspects of a production have led a number of text books and manuals for aspiring screenwriters and filmmakers to outright recommend against overdoing sexual content in order to avoid this trope from coming into effect. (Hint: if the most prominent media coverage you see for a TV series or film is devoted to its sexual content, then you've come across an example of this trope.)

For when the "fanservice" is a scene where the audience gets their (safe for work) wish, see Just Here for Godzilla.

open/close all folders
Advertising
Arts
Comic Books
Films — Animation
Literature
Music
Music Videos
Pinballs
Podcasts
Print Media
Pro Wrestling
Sports
Tabletop Games
Theater
Visual Novels
Web Animation
Webcomics
Web Videos
"Hello, yes? I'm here for the yuri. I was told there'd be yuri. No? It's more just undertones and Ecchi hello kitty sequences? This isn't what I was promised! No, I'm sorry, I have to go, no, you, NO, YOU SAID, NO, UNDERTONES ARE NOT YURI, OKAY? YOU GO ALL THE WAY OR YOU GO HOME, I'M NOT DEALING WITH THIS! IT'S YOUR ONE JOB, MY COFFEE MAKER HAS ONE JOB, TO MAKE COFFEE AND IT MANAGES TO DO THAT EVERY SINGLE DAY! I'M NOT ON THE RECEIVING END OF "COFFEE UNDERTONES"! THEY'RE GIRLS, IF THEY'RE NOT DOING GAY THINGS TO EACH OTHER THEN WHAT ARE THEY GOOD FOR???"
Real Life
Waldorf: You know, it's funny, but I don't remember any fanservice in this show.
Statler: At our age, we can barely remember the show at all!
Waldorf: Well thank goodness for that!
Both: Dohohohohohohoh!
Feedback