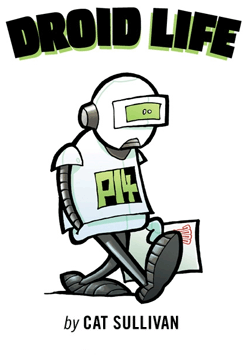 Droid Life is a newspaper comic-style strip that appears periodically in 2000 AD. Essentially a parody of the initial premise that the comic itself is written, drawn and edited by droids, it focuses on P14, a struggling wannabe script droid who writes the number onto page 14 of every copy of 2000AD (the joke being that this is erased by his colleague, Ray, when he's done) and his best friend Crumbs (whose job, incidentally, is to flick away the eraser crumbs left by Ray when he erases P14's work). P14's constant attempts to get one of his scripts published always end in abject failure.

The strip often parodies classic and current 2000AD strips in the form of P14's stories, which usually see him Comically Missing the Point of the character he's supposed to be writing.

As such, the strip has become something of an Ensemble Dark Horse within the comic and has actually had a graphic novel release.