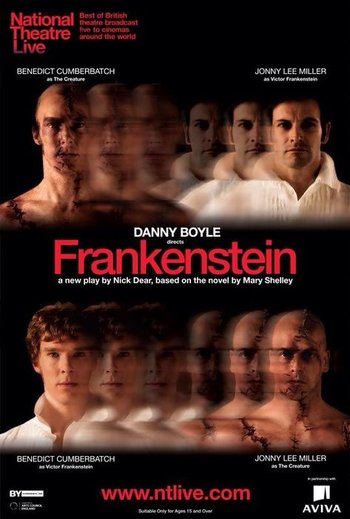 "Mom said it's my turn to be Victor Frankenstein!"
Advertisement:

A 2011 play by Nick Dear and directed by Danny Boyle. It stars Benedict Cumberbatch and Jonny Lee Miller, alternating night-by-night in their roles as Frankenstein and the Creature. Scored with dark electronic ambient by the band Underworld.

Forget your old Frankenstein, starting with the Mad Scientist mixing up bubbling potions on a midnight dreary, and using a lightning strike to animate a groaning, inarticulate hulk. No. When the stage lights up, there is a womb-like structure suspended far to one side... and the audience glimpses a man moving within it. The womb bursts open, and a monstrous-looking man staggers out — onto to fall onto the floor, wailing and weeping like a helpless newborn. The show continues to follow this nameless Creature's development and exploration of the world... sensations as delightful as rainfall and as hateful as fear, the potential of other people, and his own capacities for knowledge, wonder, and destruction. Eventually, the play is shaped by his quest to find the man who made him, and ask one driving question: Why did he make the Creature, only to abandon him? Why?

This stage production has the examples of: