Death Is Such an Odd Thing 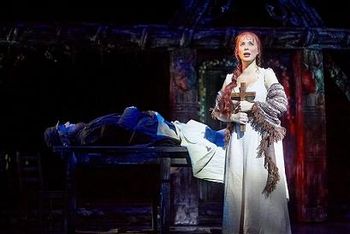 Magda is having an emotionally confusing day.
Advertisement:

A catchall term for the often confused reactions characters may have after losing someone close to them — or perhaps even an enemy.

Symptoms include frustrated speech, attempts to explain the sudden emptiness and feelings that nothing is right, and shock that one day a person can be there and the next they're gone. A person in this state tends to either rant or have trouble stringing two sentences together.

Compare Antagonist in Mourning, when a villain finds themselves depressed and listless after the demise of their longtime arch-enemy. May overlap with Death Equals Redemption, if the person dying actually redeems them in the eyes of others, and Death Means Humanity if one of the reactions involves seeing the humanity in a deceased non-human being.

As a Death Trope, this page will naturally contain spoilers!