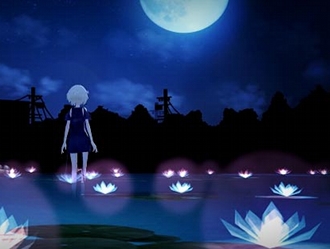 "Cold hearted orb that rules the night
Removes the colours from our sight
Red is grey and yellow, white
But we decide which is right
And which is an illusion."
— The Moody Blues, "Nights in White Satin"
Advertisement:

The Moon. Cold and distant, alone and lifeless... yet, it's the Earth's celestial companion, reflecting light to pierce the pitch-black night. So when a character is shown moon gazing, it means he or she shares many of these lunar traits: they are isolated and introspective, melancholy... yet oddly hopeful and self-reflective. All this just by having them look in silence at the moon, or using it as a big old backdrop.

He or she may have a Tragic Dream, have suffered a Dark and Troubled Past, or have embarked on some new quest that promises to change their life. The trope is also frequently used in love songs, particularly in association with unrequited love (pining for or fixating on someone is sometimes even referred to as "mooning after / over" them).

Can overlap with Weird Moon, often to emphasize the moon. In this case, the moment is used both to establish the world and the character. May also overlap with The Sacred Darkness, particularly when a full moon is paired with a clear starry night, creating an atmosphere of mystery and wonder.

Contrast Watching the Sunset and Cue the Sun.

The moon reminds Chi of Blackie (who had just moved away)...

The moon reminds Chi of Blackie (who had just moved away)...