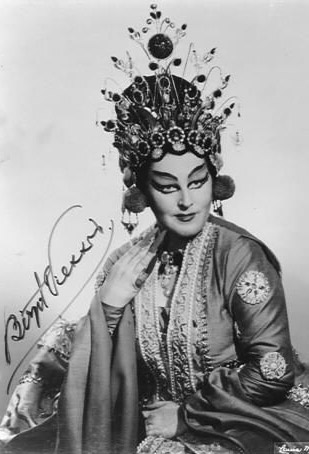 Believe her when she says she'll have your head on a stick.
Advertisement:

Turandot is an opera by Giacomo Puccini. It is mostly based on a 16th-century stage play version of an ancient fairytale first set in writing by a 12th-century Persian poet.

In ancient Beijing, the beautiful ice princess Turandot executes any potential suitor who can't answer her three riddles. Nevertheless, the poor lads seem to come to the city in droves, and among them our Hero, the Unknown Prince Calaf. Upon his arrival on stage, he meets his long-lost father, the old and blind King Timur, and with him his guide, the slave girl Liu.note They are Tartars

, who suffered a crushing defeat from the Chinese years ago, thus why the royals are Walking the Earth. Cue the last of Turandot's unhappy suitors, the Prince of Persia (no, not that one), being sentenced and beheaded. Calaf sees Turandot for the first time and immediately falls in love with her (duh). Everyone, including Turandot's three ministers, tries to talk some sense into the enamored prince, but he, of course, is determined to win Turandot's hand no matter what. He manages to answer her riddles correctly, and theoretically, he's the winner, but Turandot still refuses to marry him. Calaf, being a prince and a gentleman, offers his conditions: if she learns his name before sun rises, she can add his head to her palace's fancy decorations. If not, however, she must shut up and become his wife.

Turandot gleefully tells her people they must learn the Unknown Prince's name before night ends or she'll kill them all in most horrid ways imaginable. Cue Calaf, singing his famous aria "Nessun Dorma."

The Beijing folks try to bribe Calaf to get himself out of there and thus save their arses, but he's a Heroic Tenor, so he won't listen. Then Timur and Liu are brought on stage, tied up and beaten. They've been noticed speaking to Calaf in the beginning of the opera, so they're supposed to know his name. Turandot comes and mass torture is about to ensue, when Liu says she alone knows his name but won't tell. She then kills herself, fearing she might give Calaf's name away under the horrible tortures. Followed by the epic Tear Jerker when everyone mourns the brave little Liu and carries her body off the stage.

At this point, Turandot suffered a minor delay in writing, as Puccini died of a sudden heart attack while recovering from chemotherapy to try and remove the laryngeal cancer he was afflicted with (he was a heavy smoker). After he gave up on the opera nine months before, he visited the conductor Arturo Toscanini and begged him: "Don't let my Turandot die!" It was left to his disciple Franco Alfano to finish the opera, although Puccini and Toscanini initially wanted the experienced opera composer Riccardo Zandonai

according to his notes. But the publisher Ricordi chose Alfano because they assumed he'd be more popular with audiences and generate more money — which proved to be wrong.note What we think of as "Alfano's ending" was laboriously stitched together from Puccini's outlines — in places so illegible that Alfano was using a magnifying glass, and went temporarily blind with the effort. It isn't even the complete ending Alfano wrote; it's what Toscanini chose to include from what he wrote. The ending

and some other composers, most recently Luciano Berio

have written their own versions. American composer Janet Maguire says a shorthand version of Puccini's complete ending is actually present in his sketches and has put together an ending using those, but this has yet to be performed. On the flipside, as recently as 2017, Anton Coppola composed a decidedly somber conclusion in which Calaf is executed on the orders of Turandot.

It's a famous opera and known to be freakishly difficult to sing, especially the parts of Turandot and Calaf.