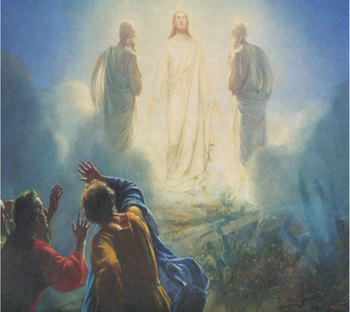 "And lo, Jesus said unto them: thou shalt make many fictional characters in My likeness."
Kaladin: I'm putting it all on the long bet. If I die, then they'll come out, shake their heads, and tell themselves they knew it would happen. But if I live, they'll remember it. And it will give them hope. They might see it as a miracle.
Syl: Do you want to be a miracle?
Kaladin: No. But for them, I will be.
— The Way of Kings (first book of The Stormlight Archive)
Advertisement:

according to Wikipedia, for most Western intents and purposes, the term has been Hijacked by Jesus, with Jesus becoming the Trope Maker.

In media, the Messianic Archetype is a character whose role in the story (but not necessarily personality) echoes that of Christ. They are portrayed as a savior, whether the thing they are saving is a person, a lot of people or the whole of humanity. They endure a sizable sacrifice as the means of bringing that salvation about for others, a fate they do not deserve up to and including death or a Fate Worse than Death. Other elements may be mixed and matched as required but the Messianic Archetype will include one or more of the following:

It's also not necessary for the archetypal character to be even remotely Christian. The Ur Examples include Osiris (Egyptian) and Inanna (ancient Mesopotamia and the actual city of Ur) making this trope Older Than They Think.

This trope is the good counterpart to the The Antichrist, which are characters inspired by the being of the same name as portrayed in the Book of Revelationnote though the book itself only refers to him as "The Beast".

Those who fall into this archetype are often Allegorical Characters. See Away in a Manger for Nativity parallels at an earlier point on the life timeline. Compare Madonna Archetype, Moses Archetype, Pietà Plagiarism, Crystal Dragon Jesus. Contrast Faux Symbolism. See A Protagonist Shall Lead Them for the pre-Christian model of "messiah".

Remember that while many Messiahs die (and many then come back to life), this is still not a Death Trope, so spoilers should still be marked.