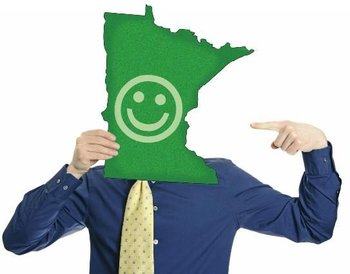 "Oh, it's basically just your ordinary English except that there are no confrontational verbs or statements of strong personal preference, you know."
— Garrison Keillor describes Minnesota speech, or Wobegonics
Advertisement:

Most cultural depictions of the American Midwest, particularly those of the Upper Midwest (Minnesota and neighboring areas), depict the people who live there as being nice, polite, and willing to help people even if they don't know them, with patronymic surnames like Nathanson or Gustafson or Larsen, often while speaking in a Scandinavian-esque accent often liberally sprinkled with "yah shure!", "you betcha!", or "don'tcha know?" (though more than one at a time is overdoing it). A dislike of confrontation and preference to not stand out or make a big deal about anything is also a common element of this personality. As is the case with most regional personality quirks, it tends to be exaggerated and Played for Laughs in film and TV, either serving as a contrast to outside characters or to show people who are annoyed by their kindness and willingness to help.

It is also fairly common for portrayals of this trope to overlap with Good Is Dumb or Extreme Doormat, at least on the surface. Anybody who has spent a good amount of time in Minnesota can tell you that that is very much not the case: just because Minnesotans put on a polite and non-confrontational face doesn't mean they are any less street-smart or strong-willed than anyone else, and in many cases can be even more stubborn than the average person.

Naturally, there is a darker element to Minnesota Nice, with the positive attitude sometimes being used to cover passive-aggression or an unwillingness to discuss things that are unpleasant. This isn't portrayed in the media as often. For a more in-depth look at this darker side, check out Jante's Law

, since many white Midwesterners are descended from Nordic people.

Very similar to the trope about their neighbors to the north, Canada, Eh?, to the extent that people from outside the two countries can find it hard to tell them apart. For a similar trope in the American South, see Sweet Home Alabama. Compare Japanese Politeness and British Stuffiness. Contrast Brooklyn Rage.