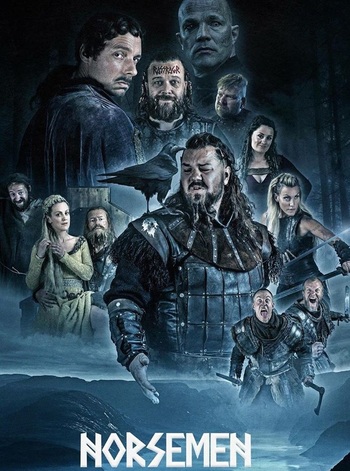 Norsemen (released in Norway as Vikingane) is a Norwegian historical comedy series originally created and written by Jon Iver Helgaker and Jonas Torgersen for the Norwegian public broadcasting company (NRK), with Netflix handling international distribution. The show was filmed simultaneously in both Norwegian and English versions by shooting each scene twice. It originally premiered in Norway in October 2016, and ran for three seasons before the show was announced cancelled in September 2020, when NRK opted not to continue the show and Netflix didn't pick it up separately.

Set in the 8th Century, the series follows a band of Viking raiders, their families, and their slaves. The comedic twist is that the Norsemen in question do not display what popular culture has solidified as normal Viking-like behavior or worldviews, but rather act more like their modern day Scandinavian descendants, as they tackle subjects such as power struggles, sibling rivalry, gender equality, fashion, existential crises, betrayal and friendship.